Shorebird breeding season in Aotearoa NZ is almost here and I thought it would be helpful to share some tips from previous years. Last season Sean and I had to deal with a nasty bunch of black-backed gulls here in Piha that predated the eggs of a pair of northern NZ dotterel / tūturiwhatu we were monitoring.

Eggs and chicks predation from black-backed gull, swamp harrier, pukeko and other avian predators is quite common but it is not something that dotterel and other shorebird species are not familiar with. The problem is when individuals have to deal with both avian predators and human-caused disturbances, such as dogs or vehicles, at the same time. Avian predators are opportunistic and they will wait for their chance to sneak in the nest and take the eggs or the chicks while the parents are busy dealing with another threat. Fortunately there are methods to decrease the risk of predator attacks and here I present a protective cover we used last year at Piha beach that proved very useful.

After having lost the first clutch of eggs, we got in touch with John Dowding and he kindly recommended us one of his "kiwi do-it-yourself" nest covers. It's basically four wooden stakes of about 40-50 mm square with a slightly larger rectangular piece of chicken wire stapled to the tops of the posts. The chicken wire should extend out beyond the posts between 5 and 10 mm. It works well because dotterels walk to and from the nest but gulls and harriers usually fly in and out and therefore don't like the wire.

Installation needs to be as fast as possible and should not be attempted until all three eggs, in the case of NZ dotterel, are laid. If you're using it for another species make sure all eggs are in the nest before the setup. Otherwise there's the possibility of the parents rejecting a "tampered" nest and abandoning it. You should obviously get all the materials ready before you go in; dig/hammer in the posts, staple the wire on and leave.

Incubating adult under the protective cover 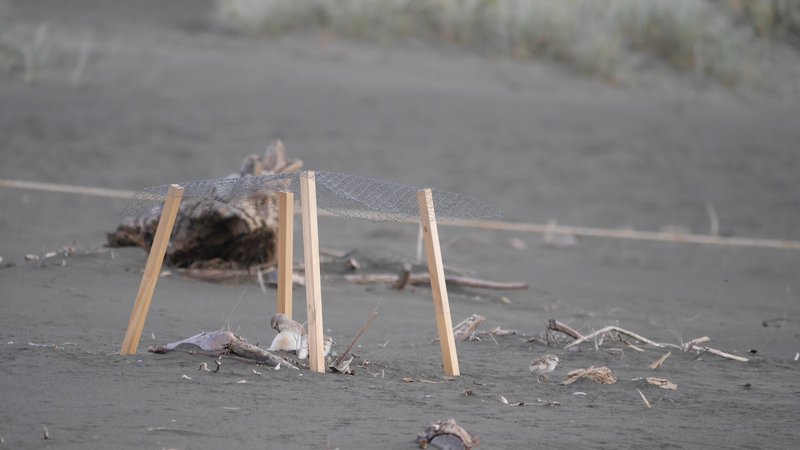 Once we set the cover we didn't witnessed another attack and the three eggs hatched, which was a fantastic result. This year we will probably install the protective cover since day one. It is probably worth mentioning that the cover stood gale-force winds and heavy rain. Beaches of the west coast of Auckland can be a harsh place with tough conditions but it lasted intact until the end of the season (good job Sean!). It was removed only after the chicks fledged.

A happy chick exploring the surroundings of the protected nest

There are other designs out there but this one worked well for us. If you're dealing with similar issues and have questions or tips you'd like to share just get in touch.