Since Auckland Council released the Kauri Dieback (KD) Report in 2017 (Hill et al., 2017), some media outlets (and other platforms/sites) have made use of the following (or similar) statement: "70% of infected trees are within 50m of a walking track" (see some screenshots below, you will find more examples by doing a quick Google search). This differs from 2017 report, which specifies that “71% of KD 1 of 101 in total) and 56% of possible KD zones (52 of 93) [are] within 50 m of a track". Four years later I have a look at council data from the Waitākere Ranges which tells a different story. 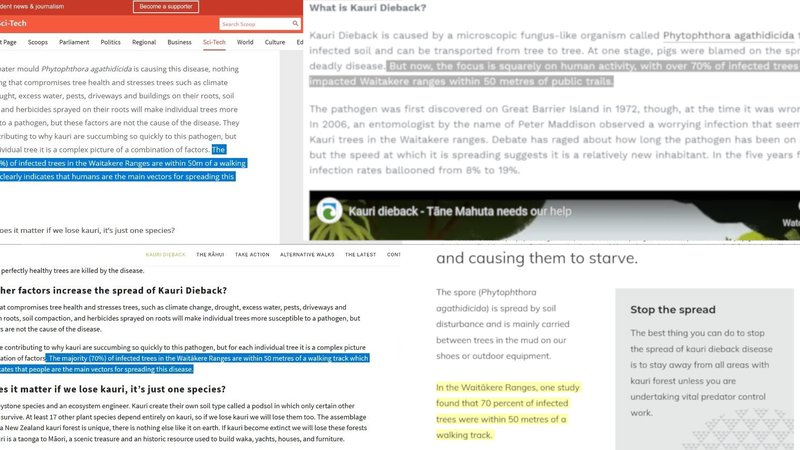 Kauri dieback in the media

I would like to state that I am not a Kauri dieback expert and I am not trying to expose an opinion over the closure of any walking track, which has been a very controversial topic in the last few years. Even more after recent studies suggest that the pathogen might have been in New Zeland longer than previously thought (Winkworth et al., 2021). I have nothing but respect for all the scientists, conservationists, volunteers, iwi etc.. who investigate and work to mitigate the effects of Kauri dieback.

This is a simple and honest analysis of the latest publicly available data relevant to the topic.

I sourced the relevant data from the GIS conservation map published by Auckland Council as part of their Tiaki Tamaki Makaurau website (great work by the way). The datasets I pulled from their ArcGIS REST services are:

For the purposes of this analysis I filtered the data to the regional parks and reserves of the Waitākeres, helping me to obtain the set of layers pictured below (Fig. 1).

The council data includes Kauri locations with the following status:

I deleted the records (n=29) with the "Not a Kauri" value since they are not relevant to the analysis. Then I calculated the distance from each record (n=30590) to the nearest track. To do so I used the v.distance algorithm available in the Grass 7.8.5 version of the excellent QGIS 3.18.1 desktop software. Using some basic commands I filtered the records based on the status field and obtained the results displayed in the table below (Table 1).

Most of the surveyed individuals (87%) are near a track (50m or closer), which makes sense as one would think that tracks are the easiest way to move in the bush to collect data. It is worth mentioning that the total sum of the buffering areas (50m) of each walking track accounts for ~13% of the total spatial extent of the parks and reserves of the ranges (Fig. 2). I obtained the buffering areas (50m) for each track by 1) applying a buffer of 50m to the lines defined in the tracks dataset and 2) extracting the area of the portions overlaying the public parks and reserves polygons.

Perhaps drone surveys or other sampling methods will help to distribute data more evenly. Again, I have no knowledge of how the data was collected and processed so I'm making an assumption here (although it doesn't really matter for the purpose of this analysis).

Despite ~87% of the surveyed data being located 50m within a track, the percentage of records with confirmed dieback (n=1835) near a track (<=50m) is ~45%. This percentage increases up to ~50% and ~57% when including Kauri with a possible dieback infection (I assumed not confirmed) and kauri with an ill thrift (I assumed reason unknown).

So, even when considering individuals "possibly infected" and individuals with "ill thrift" as infected, the percentage of infected individuals nearby a track (<= 50m ) is still less than 60%. Quite a stretch from the widely advertised 70% ¯\_ (ツ)_/¯.